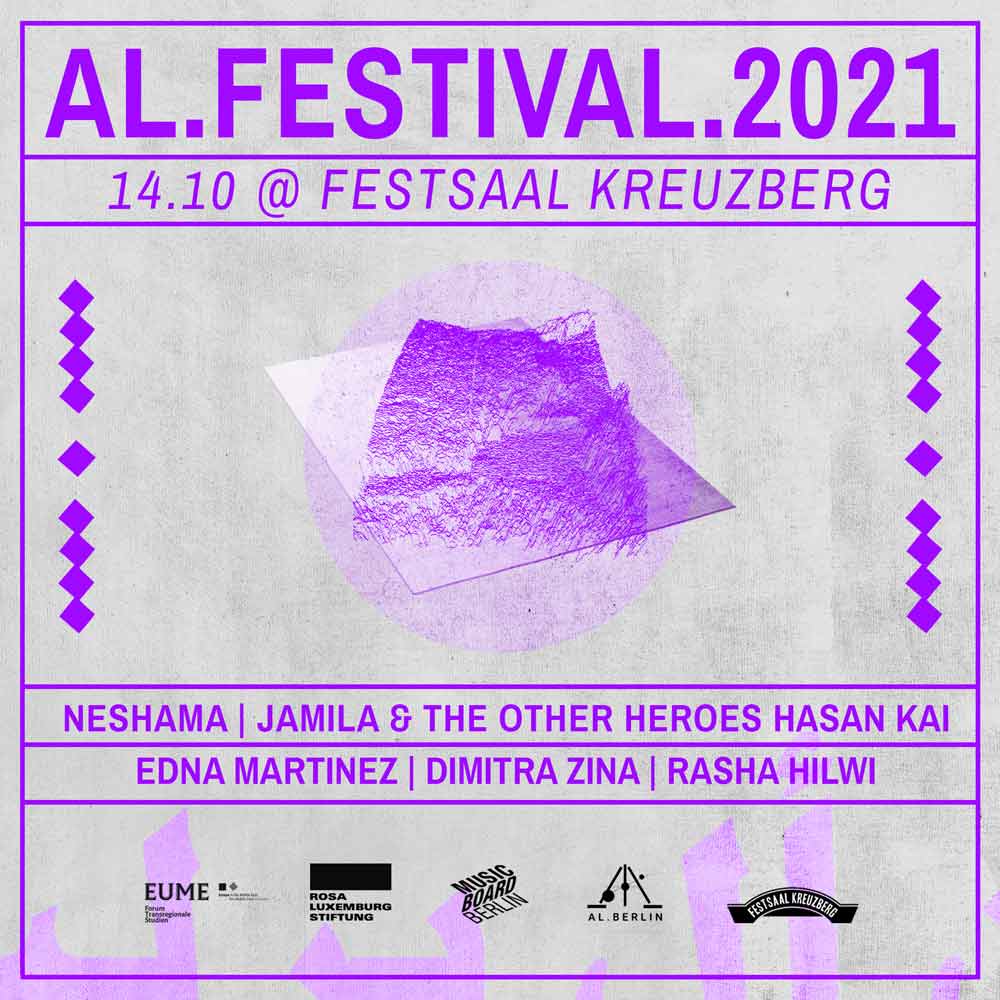 The concert takes place under the 2G regulation – you can dance without a mask and without any distance! Accordingly, admission only for guests who have been completely vaccinated or who can be proven to have recovered.
Das Konzert findet unter der 2G Regelung statt – es darf ohne Maske und ohne Abstand getanzt werden! Einlass dementsprechend nur für vollständig geimpfte bzw. nachweislich genesene Gäste.

AL.Festival.2021 Presents you with the contemporary music scene of WANA (West Asia and North Africa) in its unique Berlin Experience. The Festival is a two nights celebration of some of the most artistically revolutionary acts of the region, some of whom have Berlin as a home. This event is the Second Annual Edition of this happening, following AL.Festival.2019, and continues to underline the deeper current changes of recent years, in which Berlin is becoming a home and a base for this scene Artistically, Socially, Culturally and Politically.

NESHAMA is the first chaabi music band in Europe that comes from the Arabian uprising scene. Their debut album Neshama – Songs Belonging to the Syrian Revolution, features compositions based on the original sounds of the 2011 demonstrations in Syria. After being scattered around the world for approximately 8 years, Wael Alkak, Yazan Alqaq and Shadi Abazid will be reuniting in Berlin, to present their latest works. By collecting popular songs from Syria and beyond, they created a new style of music that stands out not merely for its digital reinventions of iconic songs, but for its attitude to, and dexterity in, the field of electronic music. Not shying away from synthesizers and the electronic equipment, this enthralling fusion pays homage to the spontaneous improvisations and the acid electronic music movement while still transporting the listener to the epochal feel of Syrian and Arabic music traditions and life.
YouTube | SoundCloud | Facebook

HASAN KAI, one half of the band TootArd, will be premiering his solo debut release Salma Sunshine. The past year has been one of global darkness and isolation – those months have brought the inspiration to define Hasan’s guitar playing and to create his debut EP, released on Carpet Ride Records in May 2021. The lush blend of American guitar and West Asian microtones set the record’s tone. The melodies glide effortlessly, soaring and swooping as they carry the listener along, introducing them to some delicate, smooth organ and synth West Asian grooves. As we slowly come out of the darkness, Salma Sunshine brings the promise of warmth and light and a hopeful future.
YouTube | Spotify | Facebook | Instagram

JAMILA & THE OTHER HEROES is a Berlin based band that combines psychedelic desert funk with political content. Born in Berlin on the day the wall came down, and raised by her influential Palestinian refugee father, Jamila Al-Yousef’s cultural activism and strong will to positively change the world is drawn deep into her artistic expression. Psychedelic guitar riffs (Leon Hast), warm and earthy bass runs (Felix ‚Fema’ Barth), Arab percussion sounds (Salam Alhassan) as well as heavy hip-hop and rock influenced drum beats (Pier Ciaccio), create a unique dance floor that the five artists see as a breeding ground for people to meet and practise togetherness – the group’s response to the currently operating exclusion mechanisms of our time. After their double single YABA يابا and BORDER SYNDROME احلام بلا حدود  release in June 2021, this is going to be the first time that the band will perform their newest work live on stage.
YouTube | Spotify | Facebook | Instagram

RASHA HILWI is a Palestinian writer, journalist and a mother of twin girls. She is the co-editor in chief of Raseef22, an Arabic language media platform standing at the intersection of identity, democracy and social justice. Rasha is a DJ storyteller, an artistic form that combines stories and music. In her work she focuses on the questions surrounding “Home بيت” and “Ghorbah غربة” and their intersection with feminism and identity. And when she brings her music set to the stage, She becomes DJ Hilwi, who believes that dancing is the most beautiful way to travel and feel home at the same time.
SoundCloud | Instagram

DIMITRA ZINA is a Greek selectress, curator and radio host on Radio Alhara راديو الحارة (Palestine) and Disco Tehran NYC (Iran/USA). In addition to her work as label manager/A&R at the Berlin-based Piranha Records, Dimitra has been actively engaged in the global music scene as music promoter and project manager for the past 8 years. Her selections focus on music from Africa and the Mediterranean with a jazz flavour.
Mixcloud | SoundCloud | Instagram

The Second Festival Night will happen on Tuesday, 2nd of November.

See You On The Dance Floor!